The birth certificate of Zachary has revealed that Elton John is the biological father. Born by a surrogate, this is the first child for Elton and his husband, David Furnish. 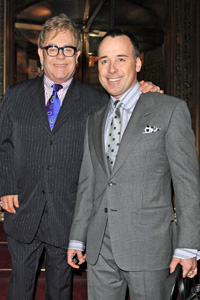 “Elton really wanted the child to have his genes,” a friend of the couple reveals. “He has a god-given talent and wanted to pass that one to a child. And after years of discussion and thought, Elton and David decided together that Elton’s sperm would be used.”

Elton and David have been together for 12 years and married since 2005.

Elton and David selected the egg donor and the surrogate mother — and had her sign over legal documents so her identity would be kept secret. They decided to have the baby in California because it is the only location in the world where they could be legal parents of the baby over the surrogate, even when the baby is in the womb.

Zachary was born on Christmas Day via the surrogate mother and weighed 7 lbs., 15 oz. “As the little boy grows it will become obvious that Elton is the biological dad,” the insider says.

The source also tells Popeater that Zachary is being pampered. “Elton has already purchased a $2 million adjoining apartment in Los Angeles to turn into the perfect nursery. Elton’s son already has four round-the-clock nannies and his own chef. This little boy is going to want for nothing except a mom.”

45 mins ago
by Daisy Maldonado