The countdown is on to the royal wedding of Prince William and Kate Middleton as new details come to light including carriage rides and rotating clergymen. 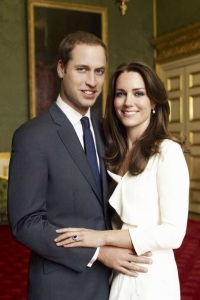 The wedding of Prince William and Kate Middleton will take place April 29 at Westminster Abbey. We know the when and where, which is half the battle. As the date draws closer, new details are emerging, making us giddy with anticipation.

The palace threw us some crumbs in the form of new details of the wedding of the year that leads us to believe this is going to be a royal wedding of epic proportions.

The official release reveals Kate Middleton will arrive in style at Westminster Abbey, by traveling in a car procession that includes motoring past London’s Mall, Horse Guards Parade, Whitehall and Parliament Square.

If you were lucky enough to receive an invite, don’t be late. The service will begin at 11 a.m. with three clergymen leading the lavish ceremony. The Dean of Westminster will conduct the service, the Archbishop of Canterbury will take part in the exchanging of the vows and the Bishop of London will give the address.

A horse and carriage will be waiting to whisk Prince William and Kate Middleton off to Buckingham Palace after the wedding where Queen Elizabeth will be waiting with a reception for the newlyweds.

Dancing and a “private dinner” will be held by Prince Charles following the reception. Stay tuned for more details as the palace has promised more to come.

Read on for more Prince William and Kate Middleton: