Lea Michele is throwing her support behind PETA by starring in a campaign to end horse-and-carriage rides in New York City. 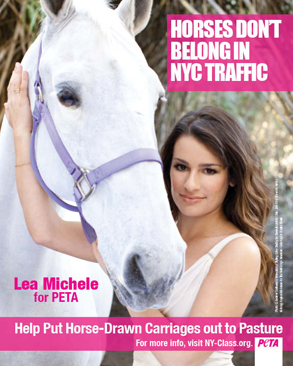 The Glee star does not appear naked a la Pamela Anderson, Khloe Kardashian and Alicia Silverstone. Instead, she’s posing with a beautiful white horse — fully clothed.

“Imagine for a moment that you’re forced to do hard physical labor all day, seven days a week, whether it’s sweltering hot or freezing cold outside,” Michele says in the PETA video. “At the end of the day, instead of relaxing on an easy chair or sleeping in a comfortable bed, you’re locked in a tiny closet all night long. That’s what it’s like for horses who are forced to pull carriages in New York City.”

“After a long day of hauling heavy tourists and being forced to breathe exhaust fumes, these horses must walk through miles of dangerous traffic and climb up steep ramps to reach the upper floors of the multi-story midtown stables where they’re kept when they’re not working,” Michele says, describing the rundown buildings never meant to be stables. “These stables would become death traps if a fire broke out.”

“Horses in the carriage industry are deprived of everything that makes their lives worth living,” Lea Michele says. “Don’t get taken for a ride. Please boycott horse-drawn carriages.”