Lindsay Lohan could be heading straight back to jail after enjoying only a single day of freedom. 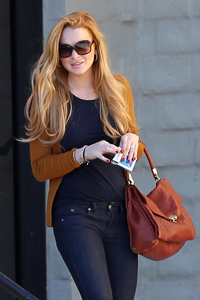 Lindsay Lohan thought her troubles were over when she was released from rehab after a three-month court-ordered stay, but they could be just beginning. The Riverside County Sheriff’s Department says they think Lindsay violated the terms of her parole during that little altercation with a Betty Ford Clinic staffer.

The Sheriff’s office issued the following statement to RadarOnline:

“Over the last few weeks, detectives for the Palm Desert Police Department’s Investigations Bureau have been investigating the battery between Ms. Lohan and a Betty Ford Center staff member, Dawn Holland. The lead investigator received a fax confirmation Monday from Ms. Holland’s attorney that she will no longer be cooperating with the investigation and does not wish to have charges filed with the Riverside County District Attorney’s Indio office for the battery.

Holland was fired from Betty Ford for selling info on Lohan to TMZ, a clear and blatant violation of federal and state healthcare privacy laws. Lohan has steadfastly denied the fight went down like it did and maintains that Holland put her hands on the actress first. Lindsay is the one who called 911.

If the judge finds Lohan in violation of probation she could be sent to jail for 180 days.

In the meantime, Lohan is prepping to move into a cozy new condo in Venice Beach, next door to her former flame Samantha Ronson. Her next court date is February 25.