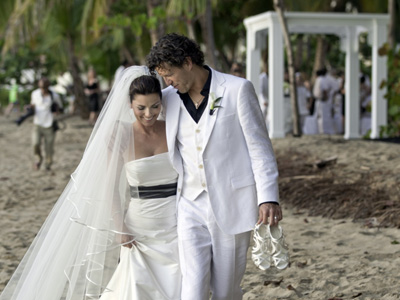 “I’m in love!” Twain wrote shortly after her engagement. “Frederic Nicolas Thiebaud has been a true gift to me as a compassionate, understanding friend and over time, an amazing love has blossomed from this precious friendship.”

Twain is wearing a beautiful flowing gown with a dark band around the waist. She bought the gown from a small boutique in Lausanne, Switzerland and accessorized it with Lorraine Schwartz jewelry.
Thiebaud wore a white suit with a black shirt underneath. Twain’s 9-year-old son, Eja, walked her down the aisle during her sunset wedding. The small, intimate wedding consisted of only 40 friends and family members, who serenaded the newly married couple with the Beatles song, All You Need Is Love. Twain also reportedly sang at her reception! 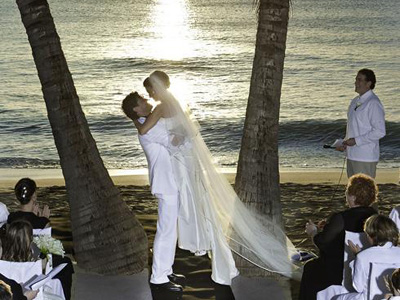