Vivica A. Fox is sporting a new accessory, an engagement ring, courtesy of her man, Omar “Slim” White. 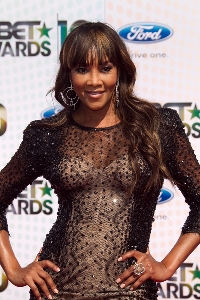 Vivica A. Fox and her sweet Southern boyfriend of one year, Omar “Slim” White, are getting married! According to Fox’s rep via Page Six, the 46-year-old actress and her 27-year-old beau spent the holidays in engagement bliss.

Omar “Slim” White, an Atlanta club promoter, allegedly presented Vivica A. Fox with an eight-carat rocking rock on December 26 while the couple was enjoying a relaxing get-away at the Ritz Carlton in South Beach, Florida.

The couple recently stepped out in style at Lebron James’ birthday at the Coco de Ville in Miami Beach, Florida, and the ring got its own fair share of attention.

This will be the second marriage for Vivica A. Fox who after nurturing her business side for so long is ready to embrace family life again. “My career has been my baby for such a long time and I’ve done well by that,” she revealed to Wendy Williams in December. “I waited for God to send me a good man, and he’s a good Southern man.”

Congratulations go out to Vivica A. Fox on her engagement to Omar “Slim” White. The new year seems to be the year of revealing celebrity engagements and weddings.