Brad Womack returned on the season 15 premiere of The Bachelor, facing both Jenni Croft and DeAnna Pappas after breaking their hearts during the season 11 finale. Thirty new ladies were also introduced, giving Brad Womack the ultimate second chance at love.

After leaving both Jenni Croft and DeAnna Pappas standing alone back in 2007 on The Bachelor, the show’s “most hated bachelor” returned Monday night with an open mind and an open heart. But before Brad Womack could proceed with finding love and meeting his 30 bachelorettes, he had to face the women he left behind. Read on to find out what went down when Brad Womack came face-to-face with Jenni Croft and DeAnna Pappas — who both, by the way, are doing just fine these days. 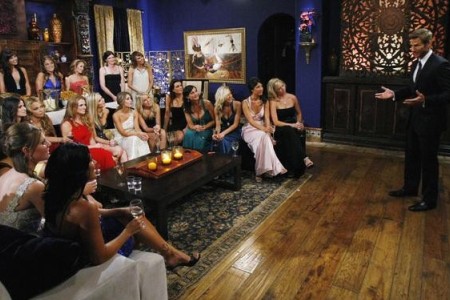 Brad Womack revealed that his fear of commitment directly related to his dad’s failure to stick around when he was a kid. Cue the biggest apology in the world to Jenni Croft and DeAnna Pappas. You could almost smell the fear wafting from the TV when Chris Harrison revealed they were both two feet away. Actually, for all the build-up the apology didn’t really live up to the hype.

What did live up to the hype, however, was the slap from Chantal O’Brien who claimed it was from “every woman in America.” They’ve been running the promo so much we didn’t think it would be that good, but a slap is a slap and it didn’t disappoint — but let’s be honest, it might have been staged.

Slaps weren’t the only thing Brad was receiving during the season premiere of The Bachelor. The ugly stares of disappointment on some of the girl’s faces when they finally realized who the man they were competing for was turned out to be priceless. All disgust aside, there were some pretty interesting girls. Here’s a quick rundown of the lovely ladies: Alli, Ashley H, Ashley S, Britt, Chantal, Cristy, Emily, J, Jackie, Jill, Keltie, Kimberly, Lindsay, Lisa M, Madison, Marissa, Meghan, Melissa, Michelle, Raichel, Sarah L, Sarah P, Shawntel, Stacey, Lisa P, Britnee, Lauren, Rebecca, Lacey and Renee.

Womack dealt with fang wearing Madison and manscaper Raichel who did a quick wax for the buff bachelor that was pretty hysterical — simmer down, it was just to the arm region. Brad Womack already stated he will not have his business waxed! Some of the ladies even went as far as to force him to provide early promises of no broken hearts this time around. Yeah, that’s not going to go well — Jackie, we’re talking to you. You can’t make him promise that. That’s the best way to make him freak out.

The night of cocktails and eyeing up the competition sounded like a broken record of assuring change from Brad Womack — with a few “get your paws off my man” for effect. 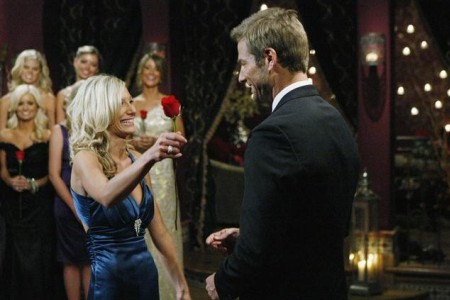 After a stellar night of revelations, slaps, dirty looks and a little manscaping action, the first impression rose went to Ashley S.

What did you think of the season 15 premiere of The Bachelor? Is Brad Womack a changed man? What do you think of his declaration that he would and did find love? Tell us! We want to know.