Pretty Little Liars returns tonight! In the episode called Moments Later, the action picks up right where we left it, which means Hanna was just hit by a car and needs an ambulance, ASAP!

For those not in the know, devious “A” has been torturing ABC Family’s Pretty Little Liars over the mysterious disappearance and death of their girlfriend Alison and threatening to reveal secrets they only shared with Alison, as well as new ones. This has created much drama for the girls, not to mention quite a dark mystery for them to unravel and a villain to unmask. 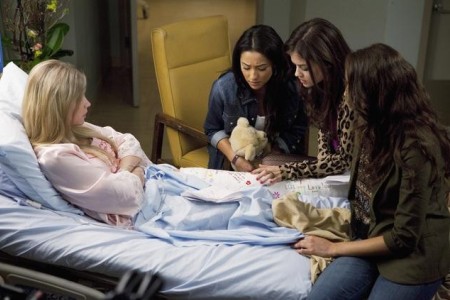 “She sends texts, emails and videos and writes things on our windows,” Lucy Hale [Aria] told Ryan Seacrest. “We hate ‘A.'”

After the midseason finale saw misunderstood Toby taken into Rosewood PD custody for killing Alison, the mysterious “A” upped her game. Hanna [Ashley Benson] closed in on the identity of their torturer…and was taken down by car before she could dish to her gal pals!

When things pick up on Monday January 3, Aria, Emily [Shay Mitchell] and Spencer [Troian Avery Bellisario] call for help. Hanna is armed with a serious clue from Mona’s birthday party, assuming she remembers whom she spotted.

Our Pretty Little Liars will try to piece this new info into all the strange haps of late. Amid this rehash and reevaluation, they’ll notice some very strange things afoot. “A” isn’t done. She’s still leaving new clues — or should we say threats!

By the way, if you read the books and think you know who “A” is, don’t get too cocky. It turns out, you could be wrong.

And neither do you! Meanwhile, Aria, Emily, Hanna and Spencer have to face the consequences of their individual lies. 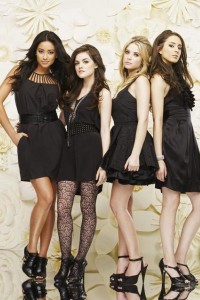 Aria is still hot for teacher, but Noel’s also caught her eye. Now that Ezra’s [Ian Harding] made amends with a poem and apology, she has her pick: Will she go straight and stick with a guy her age? Or continue her inappropriate yet oh so right romance with Ezra? And now that Hanna knows all about Ezra, what will she do with the info?

Emily’s mom also has some deep dish to think on. She found out about Emily’s budding romance with Maya. With Em’s strict Daddy back in the house, things are going to get tense, even if Mom doesn’t tell.

Spencer was hoping to mend fences between her big sis Melissa and ex Ian. Little does she know that the boy at the kissing rock with Alison before she died wasn’t Toby, who was arrested: It was Ian! What?

Don’t forget the adult liars: With Aria’s parents still trying to get past her dad’s [Chad Lowe] indiscretion, he went off and flirted with Hanna’s mom [Laura Leighton]. Then, Hanna’s mom stole a wad of cash and previews show police lights in her rearview mirror!

Pretty Little Liars returns to ABC Family tonight, Monday, January 3, at 8 p.m. If you missed any episodes last year and aren’t back at work today, you can catch the Pretty Little Liars marathon, which has already started and continues until tonight’s mid-season premiere.