Kim Kardashian debuted her first single, Turn It Up, at her New Year’s Eve bash in Las Vegas. Listen and tell us — can Kim Kardashian sing?

Kim Kardashian was excited to debut her first single, Turn It Up, to the crowd at her New Year’s Eve party at Tao in Las Vegas. 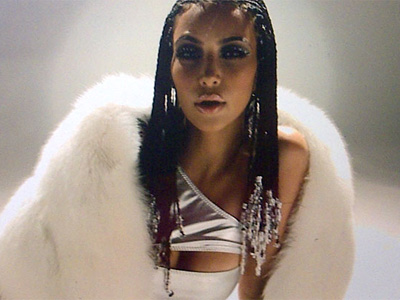 “I did this song with the Dream, and it’s really fun. I hope you guys like it!” she told her fans at Tao as the club blared her song.

How did the crowd respond? “Oh my god! [The response was] huge,” a source told MTV. “People wanted an encore and the DJ only played it once, but they wanted to hear it again. She was singing along and dancing with it. She wasn’t singing over a track, she wasn’t performing for the guests.”

Kim K has been seen sporting cornrows around town — and now we know why. Kardashian released still photos from her music video (in which Kanye West is rumored to make a cameo) in which she is wearing the “Bo Derek” braids and a white fur.

TMZ reports that the Kim Kardashian video was filmed on December 28 in L.A. Kim tweeted that day, “OMG u guys have no idea what I’m doing today! You are gonna Die!”

Listen to Kim play Turn It Up in Las Vegas and tell us what you think!