Lindsay Lohan has left the Betty Ford Center. Is Lohan ready for a fresh start? 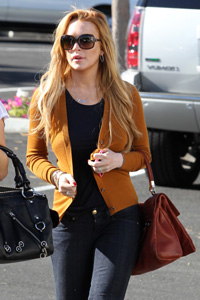 After spending three months in rehab, Lindsay Lohan was legally allowed to leave the Betty Ford Center today. She wasted no time in exiting the rehab facility.

“Today is the first day of the rest of my life. ‘The future depends on what we do in the present.’ — Mahatma Gandhi…One step at a time…”

Lohan’s next step involves reportedly entering a 90-day stay-in treatment residence in Venice Beach. A moving truck was spotted outside of her West Hollywood condo moving her belongings to her new temporary residence. She will also have a sponsor to help her manage her addictions and several months of AA meetings.

What’s next for Lindsay?

Lohan recently updated her site, LindsayLohan.com with sexy new pictures, saying they “are for my comeback.” She was fired from the movie Inferno and has no other movies on the horizon, however E! news is reporting that she wants to expand her 6126 legging line into footwear.
Her father, Michael Lohan, told CBS news that he is optimistic about his daughter’s recovery.

“She’s turned this whole situation around to use this to her advantage and she has taken the right steps and put the right people back in her life that she had at the best part of her life to really use it as a springboard,” he said.

It sounds like she is making steps in the right direction. What do you think? Can Lindsay make a comeback?