New Year’s Eve 2011 is upon us and the networks are getting ready to celebrate. Most of the NYE festivities are centered on the ball drop action in Times Square, but they’re all on your dial. Here’s a cheat sheet on which hosts, performers and celebs will be where, from Bono to New Kids on the Block and Backstreet Boys, and from Snooki to the stars of Pretty Little Liars.

For those planning to get away from the TV set, there is tons of action happening. Kim Kardashian is hosting the big Tao NYE party in Vegas and hot concerts around the country include Flaming Lips [Oklahoma City], Patti Smith [New York], Zac Brown Band [Atlanta], Usher [Miami], the Black Keys [Chicago], Jane’s Addiction [Aspen], 30 Seconds to Mars [Las Vegas], Dean Wareham and Britta Phillips [Boston], Bruno Mars and Rev Run [New York], Together as One [Los Angeles] and Sea of Dreams [San Francisco]. 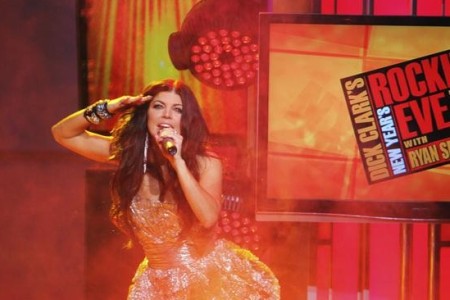 You can also catch a ton of NYE 2011 shows on Sirius XM Radio or find an event with handy websites locating all the NYE haps in your town, like this one. There’s also a host of new iPhone-Droid apps on the market to help get your party on, including the Times Square Official New Year’s Eve Ball App.

Wherever you decide to party in 2011, be safe… and be sure not to miss the big news Lady Gaga says she’s dropping at midnight.

Dick Clark and Ryan Seacrest are back together to host the classic NYE party. New addition Jenny McCarthy will cover the action in Times Square, where New Kids on the Block and Backstreet Boys, Ke$ha and Taio Cruz are set to perform. Fergie is covering the party in Los Angeles, where Jennifer Hudson, Willow Smith, Ne-Yo, Avril Lavigne, Drake, Jason Derulo, La Roux, Mike Posner, Natasha Bedingfield, Far East Movement and Train will perform. The party starts at 10 p.m., with an after party continuing until 2:12 a.m.

Carson Daly returns to Times Square to usher in the New Year with help from Today correspondents Natalie Morales and Amy Robach. My Chemical Romance, Lil’ Wayne, Nicki Minaj, The American Idiot cast and Greyson Chance are set to perform, while Bono and the Edge will sip champagne with Daly and dish about writing the music for Broadway’s Spider-Man: Turn Off the Dark, which opens in February 2011. The party starts at 10 p.m.

Nancy O’Dell will host Fox’s coverage from Times Square, with Brandy covering the action in Las Vegas. The show will feature performances from David Archuleta, Plain White T’s, former Gym Class Heroes frontman Travie McCoy and the dance crew Jabbawockeez, as well as the premiere of the Mariah Carey music video for her rendition of the New Year’s classic Auld Lang Syne. The party starts at 11 p.m.

Forget Times Square: MTV is dropping the Snooki ball in Jersey! Whitney Cummings hosts a special that was supposed to feature Snooki being dropped in Times Square. We’ll still get to see Snooki drop, just not in Times Square. The special will also feature two performances from hip-hopper Flo Rida; a sneak peek of Jersey Shore season 3 and a look back at the funny in 2010 from Saturday Night Live‘s Bobby Moynihan, Nick Kroll, Keenan Cahill and Pretty Little Liars stars Ashley Benson, Troian Bellisario and Shay Mitchell. The party starts at 10:30 p.m.

NYE odd couple Anderson Cooper and Kathy Griffin are back together to ring in the New Year for CNN, with correspondents covering parties in Times Square, Key West and Nashville, as well as Central Park’s Midnight Run. The party starts at 11 p.m., but NYE programming also includes Anderson Cooper 360‘s All the Best, All the Worst 2010 at 8 and 10 p.m., and a special episode of Larry King Live at 9 p.m.

Megyn Kelly and Bill Hemmer team up again to cover the Times Square action. Rick Springfield and Katharine McPhee are set to perform. The party starts at 11 p.m.

Andy Cohen is hosting a NYE party from his Tribeca clubhouse, with visits from “surprise guests,” as well as Sandra Bernhard, Meghan McCain, Jimmy Fallon, 30 Rock star Cheyenne Jackson and Real Housewives Tamra Barney, Lisa Vanderpump and Kim Zolciak, who will perform Tardy to the Party live. The party starts at 10:30 p.m.