Paula Abdul wants us to know that she isn’t dumb and actually has a brain. 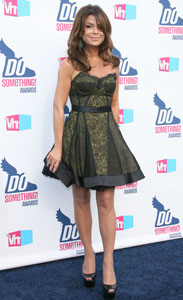 Paula Abdul became the joke of the judges’ table on American Idol for her spacey behavior, but the singer-choreographer wants us to know that she isn’t really dumb.

“I am intelligent,” Abdul told Sunday Morning on CBS. “Having a brain, that’s a concept, yes, with Paula Abdul. I have a brain.”

She also says she has never been drunk and just says no to drugs.

“I’ve never had a drinking problem,” Paula Abdul said. “I’ve never physically been drunk in my life. I don’t use recreational drugs. But I am goofy. It’s Paula. Even the people on Idol know that none of that existed, ever!”

Interestingly she specified recreational drugs while leaving out prescription drugs. Abdul once admitted to having a gnarly pill popping habit in an interview, but quickly backtracked saying her words had been taken out of context. It is widely known that the dancer has suffered from crippling back pain for much of her career.

Abdul left American Idol amidst heated contract negotiations and will now star in her own reality dance competition Live to Dance, premiering January 4 on CBS.