Former Playboy Playmate Izabella St. James is dishing on the filthy conditions and sexual exploits in the Playboy mansion with Hugh Hefner. 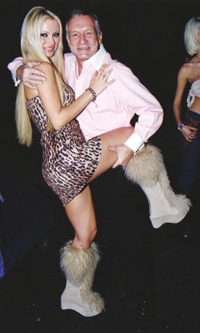 Now that 84-year-old Hugh Hefner is engaged to 24-year-old Crystal Harris, former playmates are opening up about real life in the Playboy mansion — and it isn’t pretty.

Izabella St. James wrote a tell-all book called Bunny Tales in which she talks about her time in the mansion, which included plastic surgery as birthday presents and her sexual exploits with “dead fish” Hef.

In this excerpt from the Daily Mail, she said the carpets were filthy and stained from all the pets in the house. “Hef was used to dirty carpets. The one in his bedroom had not been changed for years, and things became significantly worse when Holly Madison moved into his room with him as Girlfriend No. 1 soon after I moved in, bringing her two dogs,” she said.

“They weren’t house-trained and would just do their business on the bedroom carpet. Late at night, or in the early hours of the morning — if any of us visited Hef’s bedroom — we’d almost always end up standing in dog mess,” she remembered. “Everything in the Mansion felt old and stale, and Archie the house dog would regularly relieve himself on the hallway curtains, adding a powerful whiff of urine to the general scent of decay.”

St. James also said they got a weekly allowance of $1000, but only if they made their curfew (9 pm every night) and attended all required functions with Hefner. “Every Friday morning we had to go to Hef’s room, wait while he picked up all the dog poo off the carpet — and then ask for our allowance: a thousand dollars counted out in crisp hundred-dollar bills from a safe in one of his bookcases,” she said.

“We all hated this process. Hef would always use the occasion to bring up anything he wasn’t happy about in the relationship. Most of the complaints were about the lack of harmony among the girlfriends — or your lack of sexual participation in the ‘parties’ he held in his bedroom.”