John Mellencamp and Elaine Irwin have split, the couple confirmed. 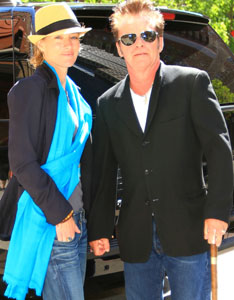 Rocker John Mellencamp and his model wife Elaine Irwin have separated after 20 years of marriage, ending the week’s string of engagement announcements on a low note.

A spokesman for the couple said in a statement, “John and Elaine Mellencamp are proud of their 20 years together and are very happy with their accomplishments both as parents and as a family. They will continue to raise their two children in Indiana but have decided to call it a day as a couple.”

Mellencamp and Irwin wed in 1992 after she appeared on the cover of his album Whenever We Wanted, and he referred to the supermodel as his “LA doll” in the hit Small Town.

While the pair has not filed divorce papers yet, this will be the third marriage Mellencamp has seen crumble. His first, to Priscilla Esterline, lasted 11 years and ended in 1981, and his second, to Victoria Granucci, lasted eight years from 1981-1989.

Mellencamp and Irwin have two sons, Hud and Speck, and intend to remain in Indiana to continue coparenting.

So the question is: Who cheated? Because A) Mellencamp has a history (the end date of his first marriage and start of his second are no coincidence) and B) Why else would you wipe out a 20-year marriage? Ideas?