Kelsey Grammer is trying to lowball Camille Donatacci Grammer in their divorce settlement, offering her a settlement worth $20 million less than what the law says she deserves. 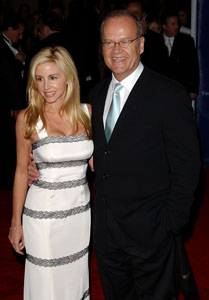 Kelsey Grammer was dumb enough to marry former Club MTV dancer and Playboy model Camille Donatacci without a prenup, then cheated on her and left her for a flight attendant young enough to be his daughter — and now he’s trying to cheat the most controversial cast member of The Real Housewives of Beverly Hills out of a huge chunk of the divorce settlement owed to her.

California law states that with few exceptions, when no prenup is in place all community property must be split 50-50. In this case, that means all of Kelsey’s earnings — $100 million worth, made over the last 14 years — are subject to the 50-percent clause.

Kelsey Grammer got greedy though, and reportedly offered Camille a paltry $30 million with no alimony or child support. How is a girl supposed to survive on that? “She rejected an offer from Kelsey just before Christmas,” a source told Page Six.

“He wasn’t offering child support or alimony, and told her through his lawyers that she’d get enough in the settlement. Because there is no prenup, Camille was certain she’d get up to $50 million, because she’s a partner in his TV company and entitled to half the money he made from shows, including Frasier, while they were married. She has accepted their marriage is over and that he wants to marry Kayte in January. Camille wants it all over, too. But what she can’t accept is how he’s parading around Kayte, who looks like the cat who swallowed the canary. Their public make-out sessions are really insensitive because of their kids.”

$50 million it is, then. Now Camille can start her day by diving into a swimming pool filled with hundred dollar bills Scrooge McDuck-style.