Ryan Phillippe wishes Reese Witherspoon nothing but the best on her engagement to CAA agent Jim Toth. 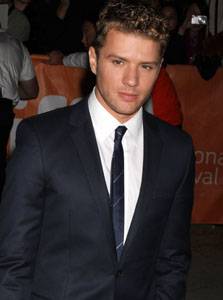 Ryan Phillippe is wishing his ex-wife Reese Witherspoon a lifetime of happiness upon hearing the news of her engagement to boyfriend of one year Jim Toth.

While crying into his beer over the state of his shattered love life, Phillippe said in a statement to the New York Daily News, “I’m very happy for both Reese and Jim. I wish nothing but the best for the mother of my children.”

He was recently linked to actress Alexis Knapp, who is rumored to have kicked him to the curb after she caught him making out with another girl at his October birthday party. Hey, it’s his party, he can do who he wants to…

Phillippe is now tied to an amazingly unsuspecting Amanda Seyfried.

Jim Toth popped the question to Reese over the holidays. No wedding date has yet been announced.

read on for more ryan phillippe