When was the last time you heard about a Broadway musical so often? Spider-Man: Turn Off the Dark seems to be turning up daily on the evening news, due to injuries, delays and bad reviews. So what is the deal with this show? Is there a Spider-Man curse? We give you all the details.

A Spider-Man musical? Really? That’s what we all said when Spider-Man: Turn Off the Dark was announced. A Broadway musical about a Marvel comic book character seemed pretty unlikely. But it was being directed by The Lion King‘s Julie Taymor and the music was being provided by U2 legends Bono and The Edge. How could it fail? Well, if it hasn’t yet failed, it’s certainly on its way. 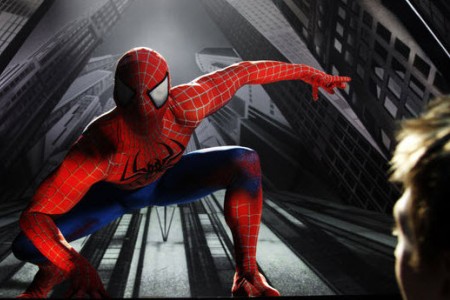 First, the opening was delayed from December to January to the latest date, February 7. The previews have been getting mixed reactions from audience members. And then there are the injuries — four major ones since the previews started at the Foxwoods Theatre, including broken wrists, concussions and a major fall of 30 feet. The latest news has actress Natalie Mendoza, who plays Arachne, leaving the show.

What is going on with Spider-Man: Turn Off the Dark?

With shows like the many Cirque du Soleil incarnations and all the crazy action films out there, there has been pressure to do bigger and bigger spectacles on the Great White Way.

Taking in a show has never been cheap, but ticket prices are astronomical these days. When you can spend $14 to watch Johnny Depp and Angelina Jolie do exciting things in gorgeous places, it’s hard to justify spending $60 for cheap seats to watch a few people emote from far away.

I’m saying this as someone who both performed in musical theater in New York City and has a great deal of love and respect for the medium. Shows need to have bigger and bigger spectacles to draw in audiences but it looks like they went too far this time. Two actors were injured at the beginning of previews. Mendoza, in her Broadway debut, suffered a concussion and was out of the show for two weeks. 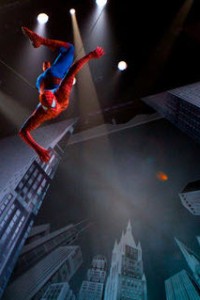 While there is no official word about her exit, reports state that the producers are currently drawing up an exit agreement. Her close friend, stunt man Christopher Tierney fell 30 feet when a cable failed and ended up with a cracked skull and fractured vertebrae. He’s finally back up on his feet, walking with the help of a brace.

The previews were shut down during a safety investigation and have been going smoothly ever since they restarted…with new safety measures in place. With actors traveling 50-mph on cables, spinning upside down and dropping off platforms, they should have been there from the beginning.

Now two official reviews have come out, defying a long standing tradition of free tickets for critics and an embargo on reports until the curtain drops on opening night.

Reviewers Jeremy Gerard of Bloomberg News and Linda Winer of Newsday bought their own tickets and released their reviews in the past few days and they weren’t exactly stellar.

The producers weren’t happy, but since critics are the only people not talking about the show, it’s hardly surprising. So what’s next for the beleaguered show? Things seem to be moving along, and with all this publicity, it’s certainly going to draw an audience.

So, are you guys interested in seeing the show? Do you think it should be shut down? Cut its financial losses and turn off the lights? SheKnows wants to know.