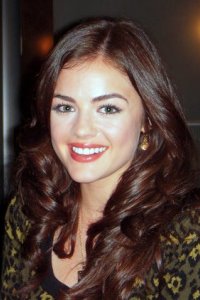 The story of Pretty Little Liars follows four young women who may have murdered their best friend. Throughout the first season, “A” — who may or may not be said friend — keeps dropping hints she knows what they did and will expose them. In season two, “A” will be stepping up her or his game.

Here’s the dish from the cast of Pretty Little Liars, the spicy, mysterious and most fabulous of series.

SheKnows: What do you wish the showrunners would let your character do that they haven’t yet?

Lucy Hale [Aria]: Ezra and I should run away and get married. That would never happen but how cute would that be? They go to Vegas. She gets a fake I.D. and they get married and move away and live happily ever after. And they’re in a new spin-off series.

Shay Mitchell [Emily]: Just break out and have a big freak out because Emily is so restricted at times and she’s the quiet one out of the group and wants everything to run smooth. So I’d like one time for her to just be like raworrr [she growls]. I’d just like to play that and go crazy but it might be coming. Everyone breaks. 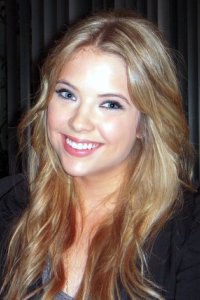 Ashley Benson [Hanna]: We’re all weird in that way. We want Spencer to be addicted to Adderall [medicine for attention deficit disorder] just dark stuff like that — something that is so much fun to play and that would work for Spencer because she’s always doing all this work. For Hanna though, I thought from the beginning that Hanna and Detective Wilden would have a thing for each other. Older men! If he comes back maybe! That would be cool!

Troian Bellisario [Spencer]: Well, they’ve already done some of it. They found out that I speak French and they’re kind of incorporating that because Spencer studies French and Latin in the books. But Spencer’s always doing plays so I think it would be really cool if they’d let me get chased around a dark theater one night, like in a costume play. That would be fun! I would love her to do an Ophelia scene while getting texted.

Ian Harding [Ezra]: I wish he could have a car chase! That would be great. He’s got this really nice Toyota, pretty great for a teacher’s salary, so somebody should be chasing him. Could we get a hooded figure sneaking around my car? Then he chases me and I have a huge gun and I can shoot at him! But there is too much time in the gym required for doing action stuff so we’ll see.

Brant Daugherty [Noel]: I wish that they would let me get the girl! I’m headed that way in episode ten (with Aria) but we stumble upon a roadblock when I walk in so I’m hopeful they’ll let me get a chance in the spotlight with her for a minute. I’m not entirely sure they are hooking up but hey….

Brendan Robinson [Lucas]: There hasn’t been a Lucas transformation yet in terms of style and wardrobe. In one of the fittings, the costume designer was saying, ‘Oh no, we haven’t gotten into the Lucas transformation yet.’ She was teasing though. I don’t do a lot of shopping and I’m not in tune with style but they put me in something a little while ago and it looked really good. They took a picture and the showrunners looked at it and they didn’t go with it. I guess because it looked too good. And could Lucas possibly turn into a more popular person? It’s in the books. Before he became the soulful outcast, he was in the kind of popular crowd and then he and Hanna kind of switched roles.

Keegan Allen [Toby]: Toby is just so dark. It would be cool if they find him in a dark lair with the books and the bats and he’s playing the organ and wearing a mask!

SheKnows: What music is everyone on the Pretty Little Liars set into right now?

Brant Daugherty: Anything that I can’t see the dollar signs on. If I can tell you made it just to sell another record or get that single on the radio, I’m probably not going to be into it. Lately I’ve been into Mumford and Sons a lot. I like everything from Beethoven to Frank Sinatra, things on the top 40. My iPod is the most random jumble of stuff. I’m learning the guitar thanks to the show as well. I can at least blend if we do a musical episode. 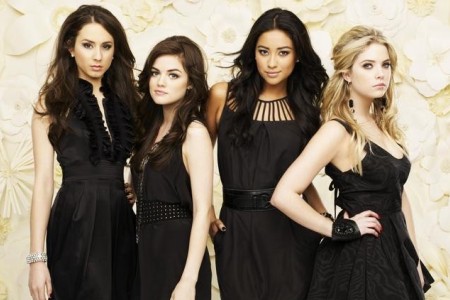 Brendan Robinson: I love Vampire Weekend. I love their sound. It’s so different. That song Cousins that they do, it’s so interesting. I like bands that are interesting, kind of off the beaten path. I like some indie rock stuff. I love U2, I love 30 Seconds to Mars, their latest album. I sing and went to a performing arts high school, like a lame version of Fame, only 80 kids there and I took tap dancing for five years because we didn’t have P.E.

Shay Mitchell: Anything and everything. I love Italian music; Frank Sinatra when I’m cooking pasta or I’ll do soundtracks. I love the Eat, Pray, Love soundtrack or Vicky Cristina Barcelona. That Spanish music is amazing. I’m always trying out different things. The girls on the show are always listening to something and will be like, “Hey, check this out.” Then I find a new band that I love but it varies according to my mood. But definitely something upbeat in the morning to get me going!

Ashley Benson: Everything except country. I’m into Pink Martini right now. I listen to them on weekends when I cook and play with my dog and have friends over. I also like Lady Gaga and Rihanna and The Pierces; different kinds of music but I can’t do country.

Ian Harding: I dabble in everything. I’m a really big fan of folk music but I’m going through this phase of this composer John Adams. He did the music for this movie I Am Love and it’s ridiculous when you listen to it. You’re put into another universe. Then I’ll turn around and have some really offensive hip-hop on. That’s great for the gym, or angry death metal that you can’t get away from because you are running and it’s strapped to you. I’m across the board depending on my mood.

Keegan Allen: Love Bob Dylan and Van Morrison, Radiohead is incredible. Neil Young, Elton John, John Lennon, the Beatles. Love all that. I play piano and just picked up guitar last year. I’m teaching myself but it’s an incredibly long process. I taught myself piano but when you move to guitar it’s like whoa! Some people I’ve met are sooo good but I’m learning and I really am mutilating my fingers.

Troian Bellisario: My staples of all time are Conor Oberst of Bright Eyes and Elliott Smith and Regina Spektor is always somewhere on my computer or record player, but recently I can’t stop listening to the new Arcade Fire album. I went to their show and it was so good live — the most amazing visualizations and sounds. I love Iron and Wine too.