Snooki will no longer drop inside a ball at New York City’s Times Square for New Year’s Eve. Her new location? The Jersey Shore, of course. 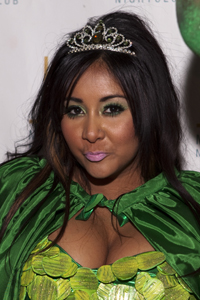 Nicole “Snooki” Polizzi had originally announced she would be dropped like “a friggin’ hamster” from the famous ball at New York City’s Times Square, however, authorities quickly shot down that idea.

“It was never intended or requested for Snooki to be in the actual New Year’s Eve Ball in Times Square,” the producers tell People.com. “The request to have her in a separate ball on a set-back roof came too late and was too impractical to fit in to our outdoor events.”

Snooki, one of the stars of MTV’s reality show Jersey Shore, will now be dropped inside a ball in Seaside Heights, New Jersey — the location of season one and season three of Jersey Shore.

TMZ has photos of the giant ball with a lit-up “Snooki” sign being assembled near the famous Jersey Shore house.

Her Jersey Shore co-stars are planning on breaking the Guinness world record for fist-pumping, however, no word if they will stay in New York City or move it to New Jersey.

For more on Jersey Shore: