Khloe Kardashian and husband Lamar Odom are getting their own reality TV show! 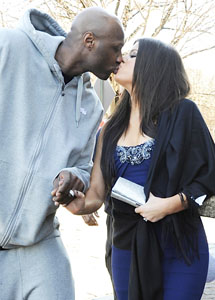 Khloe Kardashian and Lamar Odom started their marriage on a reality show and now will continue it on one. The couple will start filming their as-of-yet unnamed spinoff of Keeping Up with the Kardashians for E! in the spring.

Khloe and Lamar wed on an episode of the show on September 27, 2009 and have had a relatively drama-free year-plus of marriage since then.

The show is thought to be a Newlyweds-style concept focusing on Khloe’s day-to-day life balancing her career with being a wife and stepmother to Lamar’s two children, Destiny and Lamar Jr., with ex-wife Liza Morales.

Khloe is no stranger to the TV cameras: In addition to Keeping Up with the Kardashians, she also starred in Kourtney and Khloe Take Miami. Lamar has gamely appeared on the former since their wedding.

Let’s hope this plan turns out better than the Kardashian Kredit Kard and that Khloe and Lamar don’t fall victim to the reality TV marriage curse — the very same one that claimed the marriages of Jessica Simpson and Nick Lachey, Carmen Electra and Dave Navarro, Britney Spears and Kevin Federline, Travis Barker and Shanna Moakler, Jon and Kate Gosselin, Whitney Houston and Bobby Brown, Hulk and Linda Hogan, Danny Bonoduce and Gretchen Hillmer…

read on for more khloe kardashian