Reese Witherspoon would like you to meet her fiance Jim Toth — her first non-famous partner in forever. 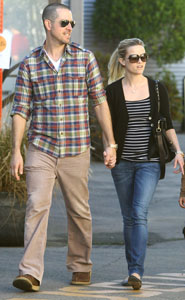 Reese Witherspoon got engaged to Jim Toth over Christmas, and she wants everyone to know how awesome he is.

“The best barometer is your friends. I have no perspective. Somehow when they say it to me, I feel happy. My mother said, ‘You seem like your old self.’ Where did I go to? Where have I been?” mused Reese Witherspoon in a pre-engagement December interview.

Despite Toth’s close ties to the industry — he’s an agent with CAA — he is not a celebrity and represents the first non-performer Reese has dated since before her marriage to Ryan Phillippe, from whom she split in 2006.

So is dating a so-called “normal” guy different? “There’s not a compare and contrast. I don’t have a chart. I don’t blog about it. I’m definitely happy,” said Witherspoon. “I’m happy with all the experiences I’ve had. I’ve learned what I don’t want. I’ve probably gotten closer to what I do want. It’s good. I’m currently very happy.”

Toth and Witherspoon started dating in January 2010 but didn’t go public until a trip to Ojai for her birthday in March. They have since stayed pretty under the radar — until this week’s announcement.

read on for more reese witherspoon