Brett Favre has been fined $50,000 by the NFL for withholding information in a sexting case that could have effectively ended his career. 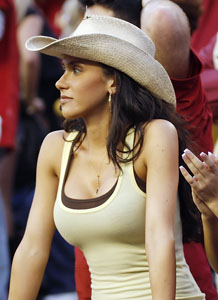 Brett Favre has been under investigation for sending lewd texts to Jenn Sterger, a hostess working for the Jets — the team he played for at the time. Sterger claimed Favre sent her sexual text messages, including photos of his penis, throughout the 2008 season.

Despite the fact that in several of the photos a wristwatch identical to the one Favre has publicly worn multiple times can be seen, the NFL says there wasn’t enough evidence that the quarterback violated league policies about workplace conduct.

“The forensic analysis could not establish that Favre sent the objectionable photographs to Sterger,” the NFL said in a statement. “The review found no evidence to contradict the statements of both Favre and Sterger that they never met in person, nor was there anything to suggest that Sterger engaged in any inappropriate conduct.”

Instead, the league gave Favre a slap on the wrist for dragging out the proceedings. “Commissioner Goodell also determined that Favre was not candid in several respects during the investigation, resulting in a longer review and additional negative public attention for Favre, Sterger, and the NFL.”

Brett Favre was fined $50,000 for withholding information — less than one percent of his $16 million season salary.

As you can imagine, Jenn Sterger is ticked. After all, she was never after cash for herself — she simply wanted Favre to be held accountable for sexual harassment in the workplace. The fact that the NFL says there wasn’t enough evidence to back up her claims is something she finds ludicrous.

“To the contrary, our evidence and the personal testimony of Ms. Sterger clearly showed a pattern of lewd and offensive behavior by Mr. Favre that lasted all of the 2008 season,” said Sterger’s lawyer.