Kelsey Grammer is trying to push through his divorce as fast as possible so he can marry his flight attendant mistress.

Actor Kelsey Grammer, whose divorce from Real Housewives of Beverly Hills star Camille Grammer is probably going to cost him a whopping $50 million, is trying to push through the legalities ASAP so he can marry the flight attendant with whom he has been carrying on an affair for nearly a year. 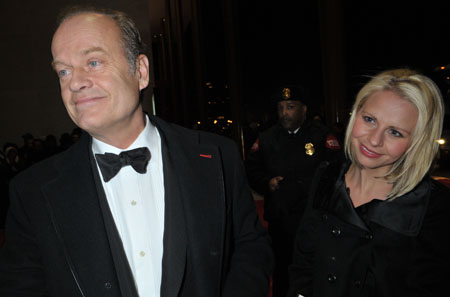 Kelsey Grammer says he is deeply in love with 29-year-old Kayte Walsh and desperately wants to marry her.

“We are planning something we wish to be a private affair among several of our friends. Anything else is conjecture and false. Kayte and I are the only reliable source for this story. End of story.”

Problem is, Grammer’s third divorce — this time to Camille — isn’t final yet. Kelsey has a plan for that though: He is asking the judge for a rush job and anticipates everything wrapping up in the next couple of months.

Grammer and Walsh met on a Virgin Atlantic flight to New York on which Kayte was working. Kelsey and Camille have two children; he has two others from previous relationships. Kayte miscarried his child several months ago.