LeAnn Rimes just got engaged to Eddie Cibrian — but she takes to Twitter to refute the rumors that she is also pregnant. 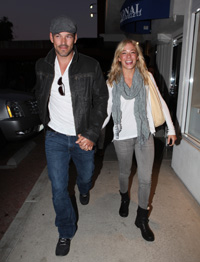 It seems that as soon as a celebrity gets engaged, pregnancy rumors are never far behind. Although, in the case of some celebs (Natalie Portman, for example) these rumors prove to be true.

LeAnn Rimes took to Twitter to respond to Internet rumors that she and her new fiance are also expecting.

“@Hollyscoop this is such BS!!!! Lol, you people all report BS.”

And possibly to prove her point, she tweets about drinking while on vacation in Cabo:

Hollybaby reports a source saying that Rimes “thinks she’s expecting.” They report she was spotted buying pregnancy tests at a Rite Aid in Calabasas, California.

They go on to say, “They’ve been trying for a while and after many pregnancy tests, she finally got the reading she was hoping for — the test was positive.”

They cite another source as saying, “LeAnn has been very vocal about wanting Eddie’s baby. She can’t wait to be Eddie’s wife and have his children.”

Despite the reports, it seems like this pregnancy rumor has been put to rest — for now.