In the wake of news that model and socialite Lydia Hearst will play Lindsay Lohan in the spoofy biopic Dogs in Pocketbooks, Dina Lohan is talking lawsuit — again. 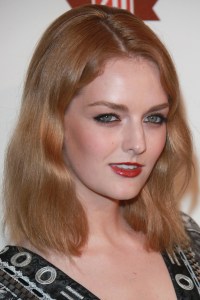 The hubbub started after news of Dogs in Pocketbooks hit on Sunday, December 26. Screenwriter Charles Casillo got tons of press for his upcoming film after telling the NY Post that Lindsay Lohan lookalike Lydia Hearst Shaw, 26, is set to start shooting this February, alongside Dynasty alum Joan Collins.

“Lydia will play a bratty movie goddess in and out of rehab, in trouble with the law, and hounded by greedy agents, predatory paparazzi, off-the-wall stalkers and crazed media — a role obviously based on Lindsay Lohan,” said Casillo. “[The movie] is in no way mean-spirited towards Lindsay. It’s the kind of thing she has spoofed about herself in the past. It’s more of a satire about the crazy people around her and the situations they generate. It satirizes the obsession with modern celebrity.”

It took less than a day for celebu-Mama Lohan to start talking lawsuit. Dina Lohan told TMZ that Dogs in Pocketbooks “is definitely based on Lindsay’s likeness. We have a very strong case. It’s shadowing E*TRADE.”

“They are again using her likeness without her being compensated,” said Lohan’s lawyer Stephanie Ovadia.

Faced with the wrath of the Lohans, Casillo is now backtracking, telling TMZ that the character is not just based on Lindsay, but rather an amalgamation of young celeb disasters, including Paris Hilton, Britney Spears, Marilyn Monroe and Jean Harlow.

The Dogs in Pocketbooks title is clearly a reference to Paris Hilton’s little sidekick pooches, supporting his current claim. It also makes sense Casillo would cling to a familiar, newsmaker name in promoting his upcoming film. Unfortunately for him, however, he chose one of the most suit-happy clans in Hollywood. SheKnows is quite sure we’ll be hearing more on this one, so stay tuned!