Will Javier Bardem appear on Glee? The answer is… 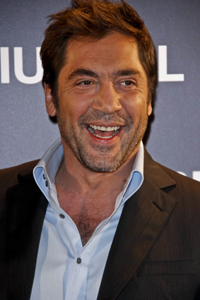 Javier Bardem might be appearing on Glee this season — but nothing has been set in stone yet.

Bardem, who is expecting his first child with Penelope Cruz in 2011, says there have been talks but nothing has been finalized yet.

“The Glee situation is that [show creator] Ryan [Murphy] and I talked together about it, and we had a blast imagining ideas. I don’t know if it’s gonna happen or not,” said Javier Bardem, an Oscar-winner for No Country for Old Men. “I guess it’s been out there too soon? But it doesn’t depend on me.”

Whenever it happens, Bardem is ready — and experienced.

“But no, singing is not my strongest skill. I guess that’s why I want to do it, because I know it’s something I have to work on!”

Whatever happens, Bardem better fit it in fast — wife Penelope Cruz is reportedly due in late January or early February. The clock is ticking!