Patti Smith’s memoir of her relationship with the late photographer Robert Mapplethorpe is not only an unusual love story, it’s a portrait of two young artists in the 70’s shaping their artistic voices at the Chelsea Hotel. Although many of us think of Smith as purely a rock and roll artist, her first love is poetry and performance art. 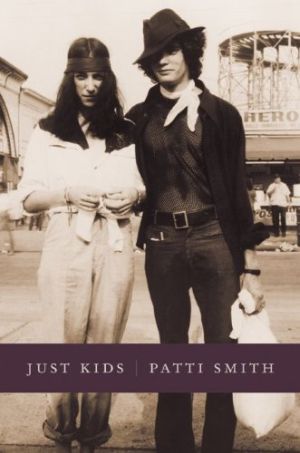 Now out in paperback, Just Kids by Patti Smith is a New York Times bestseller as engrossing as any celeb memoir out to date.

The beauty of Smith’s poetry comes out in her descriptions throughout the book, painting and capturing the energy of the 70’s and what it was really like to be suddenly talking to Janis Joplin and Jimi Hendrix. The tragedies of their young deaths were felt deeply by Smith who gave tribute to Jimi and his influence on her most recognized album The Horses (1985).

Although Smith was not as obsessed with fame the way Robert was, she allowed him to pull her along to Max’s where Andy Warhol’s “Factory” crowd like Edie Sedgwick would gather at night over and over. She documents the change as the rock crowd eventually replaced them as they faded into death and obscurity.

Sexual agendas in Just Kids were electric and the energy wasn’t defined in black and white, straight, gay, married, or homeless. Smith and Robert were broke so Robert would go to Times Square to hustle for money. Even if you are not a fan of the Rock and Roll Hall of Fame member’s music, Smith’s gripping memoir is an engrossing tribute to her relationship with Mapplethorpe as they face the challenges of poverty, keeping their artistic values intact as they divided and came back together to find one another over and over again in new ways.

Reading a female’s perspective on the 70’s artistic scene is a powerful journey that made me rediscover the relationships between artists and the magical spirit of some of rock and roll’s greatest artists.