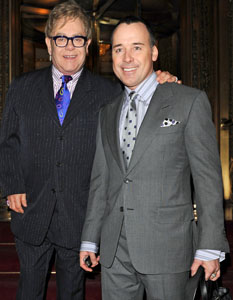 Elton John and husband David Furnish welcomed their son into the world via a surrogate on Christmas Day.

“We are overwhelmed with happiness and joy at this very special moment,” the couple announced in a statement. “Zachary is healthy and doing really well, and we are very proud and happy parents.”

Elton John, 62, and David Furnish, 48, entered a civil partnership in England in 2005 after a 12-year relationship. They expressed their wish to adopt a Ukrainian orphan in 2009 but were denied due to John’s age and marital status. The pair vowed to support the child and his brother while campaigning to change Ukrainian adoption laws.

John and Furnish split their time between homes in Atlanta, Nice, London, Venice and John’s lavish estate in Berkshire, England.