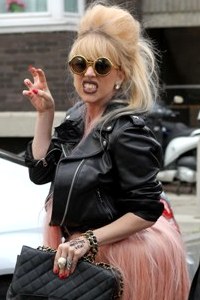 Lady Gaga took the number one spot in 2010 for her work as an advocate for the gay community. Lady Gaga spoke out for the long-awaited repeal of Don’t Ask Don’t Tell, hosted the Hands Up for Marriage Equality event supporting same-sex-marriage and donated 100-percent of the proceeds from her MAC Viva Glam campaign to HIV-AIDS prevention.

Alicia Keys came in second with her Keep a Child Alive organization, which provides AIDS treatment worldwide. She was the star motivator behind the recent Digital Death Campaign in honor of World AIDS Day, an effort that saw celebrity tweeters and Facebook users like Usher, Lady Gaga, Kim Kardashian, Justin Timberlake and Ryan Seacrest “kill” their digital presence by going silent to raise $1.1 million dollars for Africa and India. Keys also teamed up with her hubby Swizz Beatz to build schools and provide support to one lucky South African village.

Ashton Kutcher and Demi Moore took fourth for their work with the DNA Foundation, which combats child sex trafficking. The duo has met with world leaders and uses Twitter power to get the word out and affect change.

Ellen DeGeneres made the top five for using her fame and her show to speak out against bullying and helping the Trevor Project raise over $150,000 for members of the LGBT community struggling with mental health issues.

Heartthrob and diabetes advocate Nick Jonas takes sixth place for his work with diabetes and the Jonas brothers’ Change for the Children Foundation. Water.org co-founder Matt Damon came in seventh for his commitment to bringing safe drinking water and sanitation to developing countries and getting other celebs involved. Environmental activist Leonardo DiCaprio focused his efforts on saving endangered tigers this year to take eighth place.

Oprah came in ninth, but $40 million in donations also makes her the Giving Back Fund’s top celeb philanthropist.

Justin Bieber has parlayed Bieber fever into affecting change. In 2010, he dedicated a music video to children battling illness worldwide, raised $150,000 for a Buffalo, NY children’s hospital and donates $1 from every ticket sold to Pencils of Promise.

SheKnows sends kudos to these celebs that made a difference in 2010 and hopes to hear about more celebs stepping up in 2011.