Who needs an uplifting family feel good film during the holidays? Why not try a portrait of grief? Just kidding everyone, Rabbit Hole is actually a beautifully executed look at loss and its effect on a marriage. We’d just recommend keeping Anchorman on hand for a pick me up.

Nicole Kidman’s starring role in the film Rabbit Hole has been getting a ton of Oscar buzz, and with good reason. Based on the Pulitzer Prize-winning play by David Lindsay Abaire, it’s the story of married couple Becca [Kidman] and Howie [Aaron Eckhart] who lost their young son eight months before. 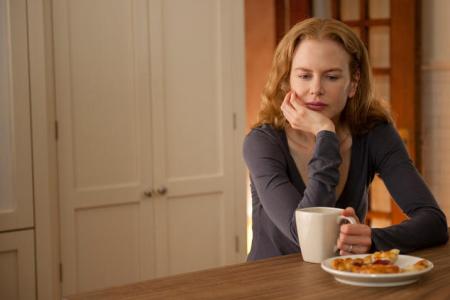 The couple tries to hold it together through a variety of methods. Becca forms an obsession with the young man [Miles Teller] who accidentally hit him with a car. Howie forms an attachment to another parent [Sandra Oh] in their group therapy sessions. They explore every option while dealing with Becca’s pregnant sister [Tammy Blanchard] and her mother [Dianne Wiest] who has issues of her own.

While it couldn’t be sadder and the difficult-to-watch moments follow each other with a startling rapidity, it’s truly a beautiful film. There is no shot of the young son being killed. It’s not over the top. Things are more implied by Kidman and Howie than said. You watch as Becca cries when she sees the boy who killed her son on his way to the prom. There is no confrontation. You just know. You realize early on that Becca doesn’t think her flighty sister deserves to be a mother when she can’t be. You see Howie moving from emotion to emotion and trying to keep a positive face on it all. He smiles when he tells people that his son is dead, hoping to make people less uncomfortable talking to him. In the very same way, director John Cameron Mitchell keeps the moments delicately subtle to keep from making you squirm.

The film is never emotionally manipulative and the performances are restrained…until they’re not. When all finally explodes, it’s heartbreaking. This isn’t about people experiencing grief. It’s about them trying not to. It reminded me of the old acting rule. Don’t act drunk. Act like you’re trying not to look drunk because that’s what drunk people do. Kidman bravely exposes what it’s like to live on two levels at once. On one, she’s keeping herself together for everyone else, being practical and a bit icy. On the other, she’s finding comfort in being gentle to the boy who took her son away, just another way to keep from cracking. My only complaint — and please, please take this as an honest observation and not cattiness — her inability to move her forehead was incredibly distracting.

Eckhart’s acting is vastly underrated. He turns in a wonderful performance here and I’m actually surprised more hasn’t been said about his work. Dianne Wiest is her usual great self, but the actor who really stands out here is Miles Teller. This kid holds his own next to Kidman. He is definitely one to watch. Ultimately, the film really hits home. It’s an honest, compelling and well-executed performance piece. It’s just terribly, terribly sad. Rabbit Hole opened in theaters on Christmas Day.