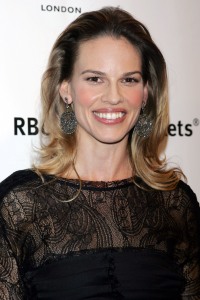 Gymnast, turned Academy Award winner, Hilary Swank originally pitched an inspiring t-shirt line to help get people to the gym. That little idea has flourished into a plan for an entire line of athletic-leisure wear, according to WWD.

Now, the Conviction star and DMA just have to find an actual clothing designer to add to the team.

No word yet on what Swank’s new line will be called, but if she’s paying attention, she’ll follow in Jessica Simpson’s footsteps and put her own stamp on it. Simpson is one of the few celeb stylistas to use her own name for her line, which may be the secret to how Simpson has built a billion dollar fashion empire with the Jessica Simpson Collection.

This move to fashion doesn’t mean Swank is hanging up her acting hat. With her film The Resident due to hit theaters in spring 2011, Swank has two movies in preproduction, New Year’s Eve and Dreams of a Dying Heart.