The Hangover Part 2 is currently filming in Bangkok, and it’s certainly been in the news from cameo casting switches to former leaders of the free world doing a bit of acting. And now word is out that production has been temporarily halted due to serious injury.

Last year we all laughed along while Zack Galifianakis, Bradley Cooper and Ed Helms had a wild post-bachelor party adventure in The Hangover. 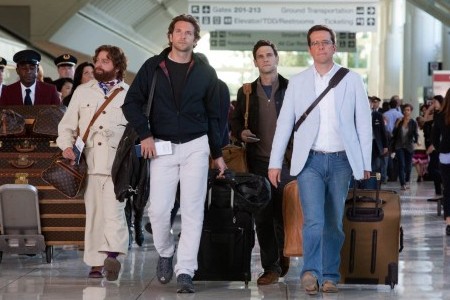 We’ve all been looking forward to part two and the production has certainly been in the news. First we heard about a possible Mel Gibson cameo. Then he was replaced by Liam Neeson.

Now a stuntman on Hangover 2 has been injured.

According to a report from Australia’s Daily Telegraph, Scott McLean was seriously injured while crashing his car into another vehicle on December 17. The production is currently filming in Bangkok where recently former President Bill Clinton filmed a cameo.

The latest report has the stuntman in a coma, but no more information is currently available. We’ll keep you updated with any further news. The Hangover Part 2 is scheduled to be released in theaters on May 26, 2011.