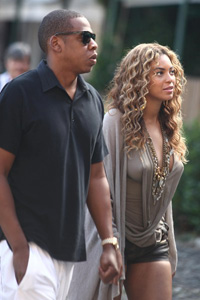 Jay-Z gifted Beyonce with $350,000 worth of Birkin bags from Hermes, said the New York Post. The mogul reportedly spent hours in the Manhattan store in a private room while shopping.

“Jay was in a private room of Hermes doing last-minute shopping. He had a guard standing watch outside. He spent $350,000 on Birkin bags, among other things,” a source reported.

He reportedly spent so long shopping he missed a lunch reservation at Nello — so they delivered his lunch to him at the store.

This isn’t the first time the couple has spent big money on gifts for each other. Beyonce gave Jay-Z a $2 million Bugatti Grand Sport for his birthday in December. Jay-Z also bought Beyonce a $20 million private island off of the shore of Florida!

How can they get any bigger than those gifts — besides buying a small country for each other?

Jay-Z is reportedly getting $1 million to perform on New Year’s Eve at the Cosmopolitan hotel in Las Vegas, so the duo is definitely not hurting for money!

read on for More Beyonce and Jay-Z