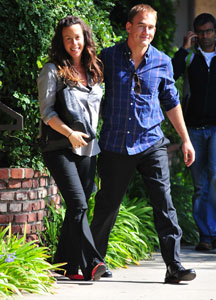 “Alanis Morissette and Mario ‘Souleye’ Treadway welcomed a baby boy, Ever Imre Morissette-Treadway, on December 25,” a rep for the new mom told People. “All are healthy and happy.”

The 36-year-old Canadian singer/songwriter, who was engaged to recently-separated actor Ryan Reynolds, married 30-year-old independent hip hop artist Souleye on May 22 in their Los Angeles home — a move she announced on her Twitter.

“Hi guys! So happy to share with you that my man Souleye and I got married. We’re very excited to embark on this journey with each other….” she wrote.

Alanis Morissette went public with her pregnancy in August. Her on-again, off-again relationship with Ryan Reynolds ended shortly before he was tied to Scarlett Johansson, a pair that did not have nearly so happy a holiday as Alanis and Souleye — they separated on December 14. Isn’t it ironic, dontcha think?