Grammy-nominated singer and songwriter Teena Marie is dead at the age of 54. Teena Marie’s manager, Mike Gardner, confirmed the music legend was found dead in her home in Santa Monica, California. While the cause of death has not yet been determined, it’s said that the Lovergirl hit-maker was found by her daughter. It’s being reported that Marie apparently died “in her sleep.” 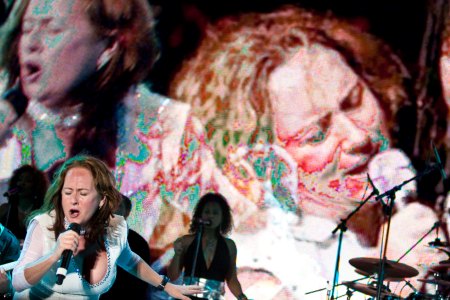 Marie’s publicist, Lynn Jeter, confirmed the singer experienced “a grand mal seizure” just a month ago. “Luckily, someone was there,” Jeter said. “The ambulance took her to the hospital, and on the way she had another seizure.”

Teena Marie was scheduled to perform in Atlanta this week. She told Lynn Jeter on Christmas she was “excited” about her first show back since suffering the seizure.

Teena Marie, whose real name was Mary Christine Brockert, was also the driving force behind such hits as Portuguese Love and Ooo La La La. She was backed by a variety of big-name labels including Motown and Epic. The multi-faceted singer and song-writer recently teamed up with music heavyweights Smokey Robinson, Kurupt and Gerald Albright on collaborations for her album Sapphire.

Stay tuned to SheKnows for more on this developing story. Our condolences go out to Teena Marie’s family and loved ones.