Hugh Hefner is engaged — again — but this time it is to playmate Crystal Harris. 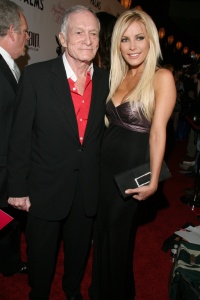 Hugh Hefner followed the holiday celebrity line-up of engaged stars — he and girlfriend Crystal Harris are getting married!

A Playboy representative has confirmed that the 84-year-old master-mind behind Playboy put a ring on 24-year-old Crystal Harris’ finger.

On Sunday, Hef was all about Twitter, tweeting his joyous news.

“When I gave Crystal the ring, she burst into tears. This is the happiest Christmas weekend in memory…I got what I was hoping for for Christmas…Crystal’s love,” he gushed.

The love life of Hugh Hefner is pretty much an open book for all the world to read and see, but he did want to make one thing perfectly clear so there was no confusion in regards to the rock he gave his love.

“Yes, the ring I gave Crystal is an engagement ring. I didn’t mean to make a mystery out of it. A very merry Christmas to all.”

A repeat marriage offender, Hefner has been married two times before — first in 1949 with his first wife Mildred, then again in 1989 when he took the plunge with Playmate of the Year Kimberley Conrad.

Do you think the third time will be a charm for the Playboy founder, Hugh Hefner? Guess we’ll have to wait and see what the future holds.