Little Fockers brings Robert De Niro, Ben Stiller, Teri Polo, Blythe Danner, Dustin Hoffman and Barbra Streisand back together for another chapter in the Focker saga. As their characters have become slightly more comfortable with one another, the stars themselves have an ease with one another that is strikingly affable while discussing the film.

One can see why. When Meet the Parents hit screens in 2000, Stiller and De Niro were an odd couple that like many before them, struck gold with the audience. De Niro and his comedic abilities are an underappreciated aspect of his talent. Stiller, clearly has the chops of the best of the best when it comes to comedy. Together, they sizzled and the film went on to earn $330 million worldwide. 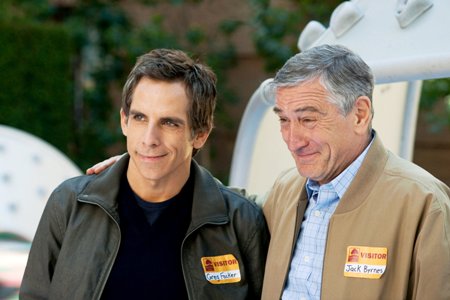 Then, the Fockers were introduced — specifically Stiller’s onscreen parents, Barbra Streisand and Dustin Hoffman — in Meet the Fockers. Also a smash, a Focker franchise was born. Ten years after the first film delighted audiences, the Focker clan is back with youngsters in tow.

In Little Fockers, the children of Stiller’s character, Greg Focker, celebrate their fifth birthday and the entire family [and the entire cast!] is getting together to mark the occasion. Stiller and De Niro welcomed the chance to come together again for some comic to-and-fro. The pair sat down together in New York recently to discuss what it means to be a Focker. Also adding their insight are the men’s on-screen wives, Teri Polo and Blythe Danner.

When Ben Stiller met Robert De Niro on the set of the Meet the Parents movie, he felt akin to his character. “It was all pretty organic. I think it was real to the situation of a guy who was intimidated by a guy who is sort of intimidating [laughs], in terms of that prospective father-in-law relationship. So, the first time, I was just going with what was really there. Then it started to develop into getting to know each other a little bit more,” Stiller said.

He went on to say that what he enjoys most about Little Fockers is that his character Greg is building some backbone when it comes to De Niro’s menacing father-in-law. “What I like about the third movie, is it takes it to the next place where Greg is trying to feel his oats a little bit. He’s saying, ‘You know what? I’m a little sick of this. I can’t deal with this anymore.’ He feels comfortable enough to talk back to Jack — to see it through to where it’s been headed for a long time.”

So Ben, where does Little Fockers find the Focker family?

“It’s ten years later, Pam and Greg have a couple of kids, they’re living in Chicago and it’s all the things that go on in a marriage when you’re ten years in and you have kids. The stress and the tension, they love each other, but life has the things you have to deal with every day,” Stiller said. “And Jack is realizing he has mortality. He’s had a little heart attack.” 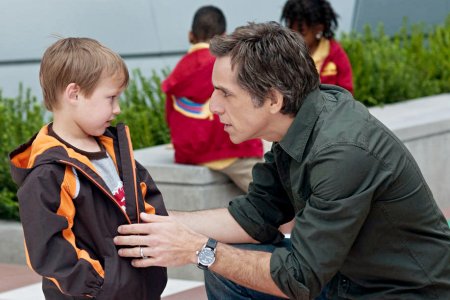 De Niro sits back and smiles. “Every character over 60 in the movies, they give you a heart attack,” he said.

Stiller is quick with a retort. “You were very good acting the heart attack,” Stiller said and laughed.

“Thanks,” De Niro replied with his trademark smirk.

If Jack is feeling his mortality, he is also worried about the future of his family. What he is not so sold on is that Greg Focker and his kin are up for the challenge. “He’s feeling like he has to pass the reigns of the family and it brings up some old tensions with Greg. He’s concerned that the Focker genes are not going to be worthy of the Burns legacy,” Stiller said.

The women of the Focker clan found returning to the family akin to finding solace. “It’s like a safety blanket. We come back for our third one and it’s like being cuddled. Here we are. We understand how the others work now. It’s a wonderful place to come back to,” Danner said. 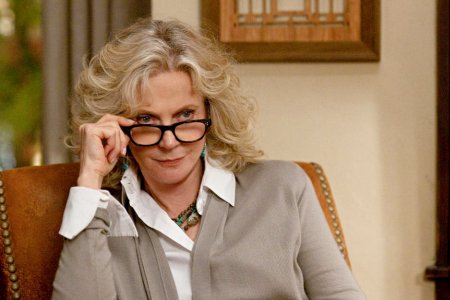 De Niro concurs and also takes the family vibe one step further in comparing the Meet the Parents franchise to something that every single person can relate. “It’s the whole family thing. It’s kind of, if you will, a universal experience. I think it’s that simple,” De Niro said. “A lot of people can identify with bringing the in-laws and all the complications and the unexpected turns of the dynamics — simple stuff.”

Danner adds that the storyline is universal, no matter what end of the awkward relationship one finds themselves. “Everyone has that feeling in the pit of their stomach before they meet the parents. Either boyfriend, girlfriend, whatever, there’s always a worry,” she said. “I think the reason this theme has perpetuated so wonderfully throughout is because it’s something that everybody understands.”

Polo believes that the awkward family dynamics of the Focker clan eases the tension of kin — especially at Christmas time — to get through the familial challenges that family get-togethers bring. “It makes you feel better about yourself. Everyone can identify with that,” Polo said. “There’s always someone out there who identifies with Jack who feels that no son-in-law will ever be good enough for my daughter. The perspective of the son-in-law, ‘Please let him like me. I will do anything to have him like me because I love this girl more than anything in the world.’ So it’s totally relatable.” 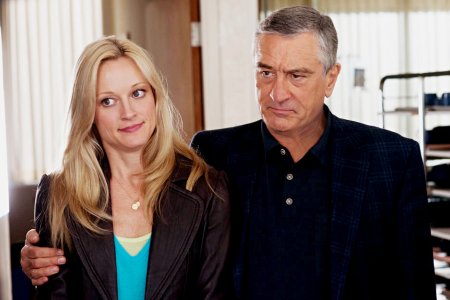 Blythe Danner and Teri Polo look back on how far they’ve come as individuals since first visiting the world of Focker. “Well, when we began, Teri didn’t have children and I didn’t have grandchildren yet,” she said and laughed. “The movies have grown as we’ve grown. It’s kind of nice to come into maturity with them.”

Polo believes that Little Fockers further pushes the envelope of the intertwined relationships at the heart of the funny film series. “You encounter each relationship, Jack and Dina’s relationship, Greg and Pam’s and Roz and Bernie, they’re all at different places in their relationship, but it’s interesting that the general theme, even though they are in different places in their relationship, is the splitting apart and coming back together,” Polo said. “You realize things, individually, about themselves, that they bring them back as couples. I think there’s been some evolution with each character and the relationships they have with each other — although, there are some things that remain the same — the chemistry between Bob and Ben!”