Camille Grammer says that despite the divorce, she still loves her husband of 14 years, Kelsey Grammer. 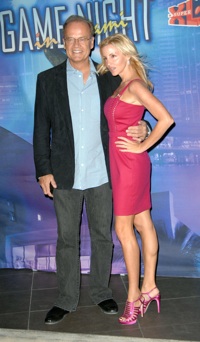 Camille Grammer has had plenty to say on The Real Housewives of Beverly Hills, and now she is opening up about her divorce to former Frasier star Kelsey Grammer.

Grammer tells Extra that despite the fact that Kelsey, 55, is engaged to 29-year-old flight attendant Kayte Walsh, she still has feelings for him. “We’ve been together for 14 years. I thought we had a really good run of it. I still love my husband, my soon to be ex husband. I respect him as a person, I don’t respect how he handled the affair and the divorce and how things went down.”

She says there is no hope of reconciliation, and she would like to move on. “He’s in love. He’s getting married, so I don’t think there’s any reconciliation. Someone gets engaged and tells you he’s going to get married in January and we’re still legally married. We’re separated, we’re not divorced yet. Our divorce is not finalized, and I got word that he’s getting married in January.”

Despite the fact that Camille would like to speak with Kelsey, she says their communication has been limited. “I would love to have an open dialogue with my husband at this point because I think it’s really important to co-parent, and the only way we’re going to co-parent the correct way is if we talk, and right now it’s through e-mail and lawyers.”

The holidays have been particularly tough on her and the kids, she says. “Kelsey enjoyed decorating the tree and that’s something we all did as a family, and so last night I was decorating the tree with the kids alone and it brought a tear to my eye, or several. It’s definitely not easy. But you know, time to make new traditions. So I’m creating new traditions with my family and my children.”