Demi Lovato has settled with the dancer who threatened to sue the Disney star after she was punched in the face on a plane. 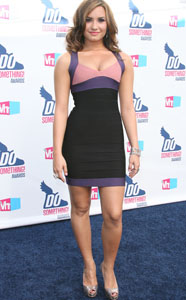 Distressed Disney diva Demi Lovato has reached an agreement with the dancer she punched in the face, precipitating her removal from the Jonas Brothers tour and her trip to rehab.

An attorney for Alex Welch, the background dancer Demi smacked, confirmed the news. “It was confidential negotiations that ended in complete and amicable resolution.”

“She [Alex Welch] is satisfied.”

Demi allegedly attacked Welch because she thought the dancer had ratted her out to handlers — apparently things had gotten a little out of hand at Demi’s birthday bash the night before. Welch denied tattling, but was left with a huge shiner.

Demi has been locked up in a treatment facility ever since, to deal with multiple issues — behavioral, eating disorders and possibly drugs. She will be staying put in rehab for Christmas and New Years.