Fugees alum and solo star Lauryn Hill dropped off the radar shortly after launching her megahit solo album and becoming a mom, but got her feet wet again with festival appearances this summer. Now Hill is on the road, with 17 tour dates scheduled so far. 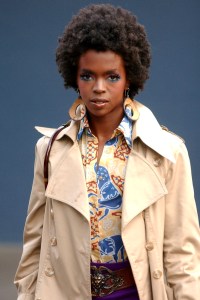 East Coast R&B, soul and hip hop fans were thrilled to hear Lauryn Hill was making a return to the stage with a handful of dates this month. While there’s still no sign of Hill heading west, she has added more dates to her “intimate North American tour” (see below).

Hill’s tour has already kicked off, with shows in Burlington, Boston and New Haven.

“Hill’s performance Monday at a sold-out Wilbur Theatre was full of questionable choices, but also a testament to her talent and proof that if she ever chooses to reclaim her throne, there truly is no competition,” a reviewer wrote in The Boston Herald. “Hill was frequently brilliant and brimming with energy despite a cold.”

It’s been 12 years since Hill’s solo album The Miseducation of Lauryn Hill dropped and even longer since she rocked the hip hop scene with the Fugees. The mother of five children with Rohan Marley dropped out of the public eye after becoming fed up with the music biz machine, but fans are hoping this return to the stage is a sign that we’ll finally get some fresh music from the songstress.

“I’m gettin’ back up, getting back out,” Hill said at the close of her Boston show. “I’ll be seeing you often. New music soon.”

Check out the tour dates below to see if and when she’s coming to your ‘hood.