True Grit may have been unfairly snubbed by the Golden Globes, but this remake of the 1969 classic scores pretty high in our book. And wow, True Grit star fourteen-year-old Hailee Steinfeld just blew us away, even eclipsing Jeff Bridges and Matt Damon! 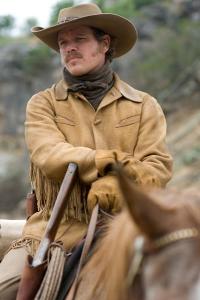 The ad campaign for True Grit might make you think you’re seeing a rough and tumble Western. In a sense, you are. Based on the 1968 novel by Charles Portis, and famously made into a film starring John Wayne, the story pulls no punches.

This version of the film doesn’t either. But what you don’t get from the commercials is how wonderfully funny it is. Of course, you expect something like this from the Coen brothers. In True Grit, they deliver what they normally do, which is a fantastic mix of humor and, you’ll forgive me here, grit.

If you’re not familiar with the story, [and I hope you aren’t since I feel like I’m the only one out there who never saw the original film] here’s the deal. Fourteen-year-old Mattie Ross [Hailee Steinfeld] is a no nonsense girl from Yell County, Arkansas.

Her father has been murdered and she tries to hire an alcoholic, grizzled old U.S. Marshall named Rooster Cogburn [Jeff Bridges] to help her bring the murderer to justice. Yes, I said “help.” This little lady wants to go with him. Matt Damon plays Texas Ranger LeBoeuf [pronounced “le beef”] who wants in on the deal so he can bring the villain back to Texas to hang. The unlikely group sets off to take the man and his gang down and leaves a trail of bodies in their wake.

According to the Coen brothers, the film is far closer to the original book than the 1969 film ever was. And the performances were brilliant. You’ve watched the ads. Can you imagine anyone but The Dude pulling off that accent without sounding ridiculous? Sure, the gruff old man learning to care about someone other than himself may have been done, but rarely with such charm. I’m honestly glad I didn’t have John Wayne’s version of Rooster to compare him to. Damon’s full-of-himself but not-so-bright LeBeouf is just funny enough that you wonder why you don’t hate him.

But the real star here is Steinfeld. The character is written as a young girl with gumption and a take no prisoners approach to life, but that could so easily have turned into one of the plucky [read obnoxious] Disney Channel stars without any base. In one scene, she tries to sell back the ponies her father bought but never acquired and verbally destroys the poor bloke she’s negotiating with. Steinfeld’s performance was one that had me immediately on IMDB, looking to see what she’s got coming up next.

Cinematographer Roger Deakins did gorgeous work here and the Coens are delightfully restrained. Every detail, every shot, every cactus is perfectly set. This may be one of the most universally appealing films the brothers have ever made. There were moments when I forgot it was these two that helmed the piece I was watching. The Golden Globes may have completely snubbed the film, but when it’s time to hand out little gold men, well, let’s just say that if True Grit doesn’t earn a few, I’ll eat Mattie’s hat.