Wrestler Hulk Hogan is recovering after doctors performed a 10-hour surgery on his back this week. 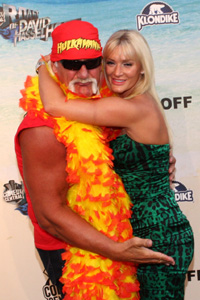 Hulk Hogan’s honeymoon consisted of a 10-hour back surgery to fuse his spine on Monday. The 57-year-old married girlfriend (and look-alike of his daughter, Brooke Hogan!) last week.

“It was a pretty lengthy surgical procedure. Doctors did some fusion work and rebuilding and restructuring of the spine. But he’s recovering smoothly,” a source tells Radar online. “We hope he’ll be able to leave the hospital relatively quickly. He’s always taken very good care of himself and in very good physical shape.”

Hulk Hogan tweeted about his upcoming back surgery, saying:

“Going for broke in six hrs. Rollin all the marbles, I bet on me..I love all u maniacs! See all u guys soon.”

read on for More Hulk Hogan