New York Jets head coach Rex Ryan is declining to comment after he and his wife, Michelle Ryan, have been linked to several online foot-fetish dating sites.

New York Jets coach Rex Ryan and his wife Michelle Ryan are calling it “a personal matter” after videos have emerged allegedly showing Michelle modeling her feet for her husband, as well as several online profiles on foot-fetish dating sites. 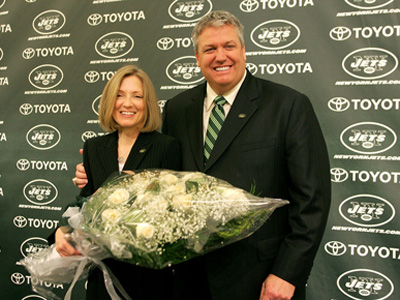 The sites reportedly discuss the couple’s sexual preferences, including threesomes and “sexual torture.”

Ryan, 48, declined to comment at a press conference Wednesday. “Obviously, I knew these questions were coming,” Ryan told reporters. “But this is a personal matter and I’m not going to discuss it.”

The videos are posted on You Tube by user “ihaveprettyfeet” and show someone who looks like Michelle Ryan displaying her feet, as a cameraman (who sounds like Ryan) talks about her feet. The New York Post is reporting that their profile shows up on a swinger’s site, as well.

The coach warned players before the press conference that this subject would come up. “He said, ‘You guys might know about this Internet situation. Some of you guys might not know.’ He said, ‘You’ll find out later on today,'” cornerback Darrelle Revis told the NY Post. “He said, ‘Right now, I feel embarrassed…Right now, we need to focus on Chicago.'”