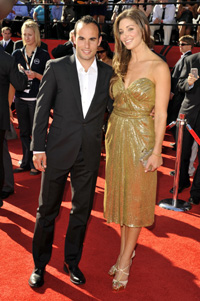 Landon Donovan and actress Bianca Kajlich have been separated for over a year, but on Tuesday, the Team U.S.A. stud made it official by filing for divorce in Los Angeles.

“We remain the closest of friends and will always be important parts of each other’s lives,” the pair said in a statement. Donovan, who cited irreconcilable differences, is seeking spousal support and attorney fees.

The pair apparently is still friends, as Donovan tweeted just last week that “Christmas done came early” and linked to a sexy picture of Kajlich in Maxim.

Donovan, 28, and Kajlich, 33, married New Year’s Eve 2006 and were separated just three years later. After his World Cup win, the duo appeared to be getting back together again — that is, until a British woman said that Donovan was the father of her child.

Donovan admitted that it was a “possibility” and he would provide appropriate support if it were true. He later told E! Online that those reports were not true. “I will not be a dad any time soon, which is good news for me.”

read on for More celebrity splits