Bret Michaels is talking about his proposal to girlfriend Kristi Gibson and how it couldn’t have been more perfect if he planned it. 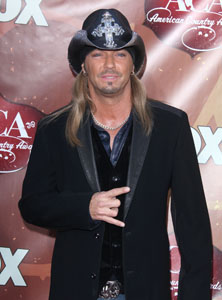 Bret Michaels says asking Kristi Gibson, his on-and-off girlfriend of 16 years and mom to his two daughters, to marry him was the right thing to do after everything they’ve been through together.

“They swore I was the guy who would never,” said Michaels, “And it feels awesome.”

Michaels told People he had considered proposing while the couple enjoyed a romantic anniversary dinner the night before, but it wasn’t the right moment. “I wasn’t ready there because I felt really strange,” he said. “It would’ve been like, I’m in the middle of proposing and oh, by the way, there’s a Cobb salad coming.”

Instead, Bret popped the question while the couple had a heart-to-heart on the deck of their Phoenix-area home.

“In my mind, it wasn’t supposed to happen like that — I wanted it to be a little more like the movies, where the white horse gallops up and all that stuff,” he said. “But when Kristi said, ‘I don’t need this ring. I don’t need the piece of paper. I love you no matter what.’ She took the pressure off.”

“She used reverse psychology on me,” Michaels continued, “and it worked!” [Ladies, this is an extremely advanced technique and should not be attempted at home without in-depth training.]

No date has yet been set.