The father of Lindsay Lohan is furious at her mother and the Betty Ford Center for creating a situation that could get Lindsay thrown in jail and set her recovery back months. 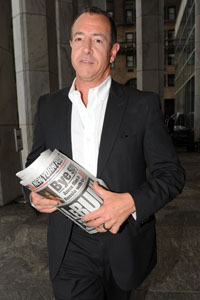 Michael Lohan blasted Dina Lohan, his ex-wife and mom of Lindsay Lohan, as an “enabler” and is super-ticked over reports she told Lindsay not to consent to alcohol and drug testing during the Betty Ford altercation.

If it went down like that, and Lindsay Lohan did refuse, she could be held in violation of parole stipulations which require her to submit to testing whenever asked.

“Dina made the mistake of being overheard telling Lindsay — and the other girls she is living with — not to take a drug test,” he said. “It’s enabling — even in rehab. How sad, are you kidding me? If this was all handled the right way, with honesty, none of this would have happened.”

For the record, Lohan is telling peeps not only did she not refuse, she was the one who suggested it in the first place. She did take the test several hours after the altercation, which was clean.

Michael is also speaking out against the clinic itself and fired staff member Dawn Holland for leaking confidential info about Lindsay to media outlets — a clear violation of HIPPA laws. “Lindsay could sue the Betty Ford clinic for millions of dollars,” Lohan told RadarOnline. “For this woman to speak publicly and break a patient’s confidentiality is unheard of in the rehab and medical field. This is a big, big issue and it’s an open-and-shut case: One of their people spoke out and that’s that. Bottom line, you can’t do that. She is personally liable for this gross invasion of privacy, as is the Betty Ford Center. Lindsay doesn’t need this or deserve it when she worked so hard and has come too far for this to happen.”

Lindsay will stay put in the rehab center until at least January 3, when she will again face a judge to examine her progress.