The trailer for the raunchy medieval comedy Your Highness has premiered starring Natalie Portman. Well, the green band, safe-for-all-ages trailer anyway. It’s full of pratfalls and sword fighting, a wizard with one heck of a hairdo and Portman kicking butt. Oh, and a Muppet. Can’t beat that!

The green band trailer for Your Highness may leave out the f-bombs, but it’s pretty clear what kind of movie we’re going to see. And it’s pretty darn funny. 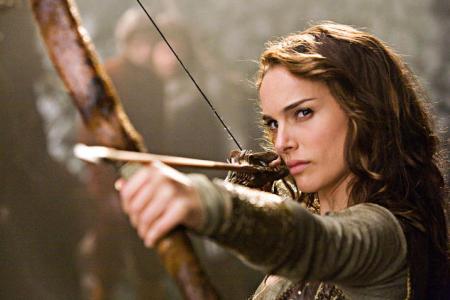 The film stars Danny McBride as Prince Thadeous, the under-achieving brother of the dashing Prince Fabious, played by James Franco [Seriously, do all movies have a “must cast James Franco” clause?]. When Fabious’ virgin bride-to-be [Zooey Deschanel] is kidnapped by an evil wizard [Justin Theroux], the brothers must undertake a quest to save her.

Helping them along is Isabel [Natalie Portman], who dresses in pants, shoots a bow and displays general bad-assery. We’re not talking about high drama here. These are the people who brought you Pineapple Express.

The guys fight a giant multi-headed monster, and when Fabious gets bitten high on the thigh, there are jokes about “sucking out the poison.” They watch Isabel undress by a lake, she calls them maidens and kicks the butt of Thadeous when he boasts about his prowess.

The final joke is about what he was doing beneath the sheets by himself. Sure, you could toss this off as a Vampires Suck parody, but it’s not. Hey, it’s got Franco and Portman, both up for a zillion awards for their acting. If you really want to get a feel for the film, [and you’re over 18] watch the red band trailer. This one not only sanitizes what is a no holds barred comedy, but it digitally covers Natalie Portman’s rear end with CGI panties.

Let us know what you think. Are you excited for Your Highness? Leave your comments below.

The Your Highness trailer