Chick lit and women’s fiction fans are in for a holiday treat! Just in time for the holidays, Jennifer Weiner releases her short story, The Half-Life. 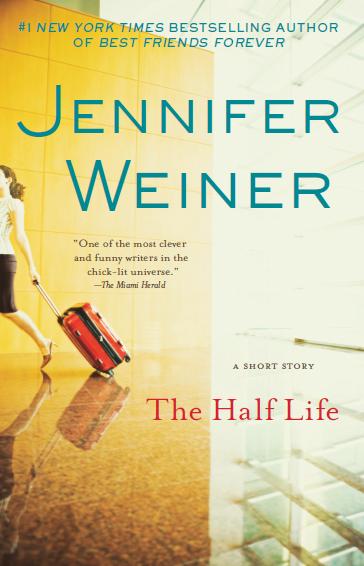 Originally from Redbook magazine’s Red-Hot Read series, The Half-Life is a short story by Jennifer Weiner, the New York Times number-one bestselling author of In Her Shoes and Fly Away Home. Fans can download The Half-Life for 99-cents where e-books are sold — to enjoy on any eReader or computer.

“My life is over,” Piper DeWitt thinks to herself, awaiting departure in the overcrowded international terminal of the Philadelphia airport for an overseas business trip, to romantic Paris no less. She watched as her husband, Tosh, put his own suitcase into the trunk of a taxi the day before. He’d been telling her for months that he wasn’t happy, and though Piper still wants to believe it is just a phase, a call to her mother from the Admiral’s Club confirms that he’s left her, left their home, left their four-year-old daughter in her grandmother’s care.

Piper met Tosh when she was only twenty-two, just the way self-help books said she would — when she wasn’t looking. Now at forty, she wonders how, through all those years, they’d gotten to this place in their marriage. When her flight is canceled due to volcanic ash spreading from Iceland across Europe, and when a handsome stranger invites her to share a cab, she realizes she can take a departure from her own life. And after a day of living like a tourist in her own city, she hopes she can still find her way home.

And don’t miss another chick lit favorite author, Sarah Pekkanen, who just released a holiday short story for 99-cents too — All is Bright.