The Focker family has grown by two, as male nurse Greg [Ben Stiller] and his wife Pam [Teri Polo] welcome two little kids into the circle of trust in the upcoming movie, Little Fockers. 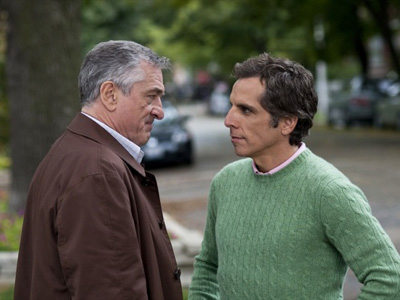 Greg must take a job with a drug company hawking a drug for erectile dysfunction to make some extra money, and his sexy boss Andi Garcia [Jessica Alba] brings plenty of suspicions [and covert missions] from Greg’s father-in-law, Jack [Robert De Niro].

Owen Wilson reprises his role as Pam’s ex-boyfriend, Kevin, who joins the Fockers for the twins’ birthday party. Don’t miss the make-out scene between Wilson and Streisand!

Can Greg prove to his father-in-law that he is finally a capable man of the house? Can he be the “Godfocker?”

Dustin Hoffman and Barbra Streisand return as Greg’s laid-back and zany parents, Bernie and Roz Focker, who have just returned from Spain to also attend the twins’ birthday party. Dustin Hoffman initially passed on reprising his role as Bernie Focker in Little Fockers. They actually showed the movie without him, and then he changed his mind and they shot several more scenes with him. “I don’t think he wrapped his head around it until he saw the preview in the theater,” director Paul Weitz joked. “Then the light bulb went off.”

Little Fockers was written by screenwriters John Hamburg and Larry Stuckey and directed by Paul Weitz.

Check out the Little Fockers trailer: