James Franco will be front and center hosting next year’s Oscars with Anne Hathaway for reasons that might shock you — others told him not to. 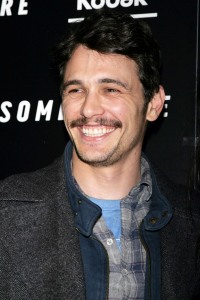 James Franco is coming clean about the process he took in deciding to host next year’s Oscars — and brace yourself, it’s a mind-blower. The SAG nominee dug deep into his soul and said yes because everyone else was telling him no. Are we surprised? Not really, because that’s just the way James Franco rolls.

James Franco and Anne Hathaway will host the 2011 Academy Awards together and the 127 Hours actor told Entertainment Weekly he changed his answer to yes in order to change things up for himself a bit. Truth be told, playing the sociopath Franco on General Hospital is already stepping outside the box, but okay.

“My initial reaction was no, then I thought about it and I thought, ‘Well, why not? Because I’ll look bad?’ Well, I don’t care,” Franco said. “When we finally met and discussed it in person, all my representatives were saying, ‘No! Of course not!'”

Being the envelope pusher that James Franco is, he just couldn’t help himself. “So that always sparks something in me. So I said, ‘Yes, of course!’ Because that reaction that they have is based on conventional wisdom of what makes a good career. And that can be boring — really boring.”

James Franco might have gone against the norm in his decision but don’t believe for one second he doesn’t take it seriously or understand the honor in being chosen to host the Oscars. He was “very, very surprised” when presented with the chance.

“I’m front and center, but I feel confident,” James Franco assured. “I’m happy to take the criticism. Even if it’s ‘the worst Oscars ever,’ I don’t care. It’s one night of the year.”

What do you think of James Franco and Anne Hathaway hosting the Oscars together?